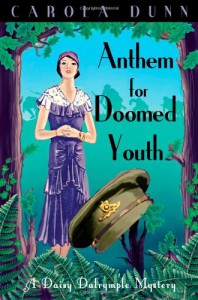 Despite all the dead bodies that usually fill the pages of cozy-mysteries they usually are quite light-hearted. As you can guess a book that takes its title from a gritty anti-war poem can't be that fluffy and light-hearted. You could say it's a darker and edgier cozy but it does work. (Or perhaps I should say it works a lot better than in the Phryne Fisher Mysteries where the author also tries Cozy: Darker and Edgier and fails). It's not perfect but overall the balance between admitting that this is somewhat darker than usual without suddenly turning the series in some psychological noir thriller works quite well. I'm curious if Dunn will try somewhat darker topics again in the future books.

Now the problems I had with this book had nothing to do with the fact that the case wasn't what I am used to but how Daisy got involved in it. It required such an ridiculous amount of coincidences that I simply couldn't buy it. (And that means something coming from somebody who has zero problems with the fact that the woman fell over bodies 18 times already...) Going into more details would spoil too much but it simply didn't work for me at all.