Review: The Legend of Sigurd and Gudrun 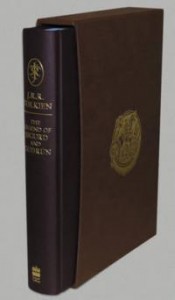 Yes this is an epic poem inspired by Norse mythology. This will not be everybody's cup of tea. I enjoyed the poem itself (but then when it comes to poetry my opinion tends to be either 'yeah I like this' and 'no I don't like this' you won't really find me gushing over poetry) and the additional commentary (most of it by Christopher Tolkien but much of it is based on notes his father left and there is also a transcript of a whole lecture JRR Tolkien once gave on the Edda) was interesting - at least large parts of it were interesting. The thing it that it assumes all readers are 120% Norse mythology and ancient Norse language geeks and interested in everything. So the commentary included (few) cross-references to Middle-Earth (very interesting for me), background on the myths (still interesting), info on where/when manuscripts had been found etc. (not something I care terribly much about) and titbits on old Norse grammar (ehm...well...). So I admit to skipping a couple of paragraphs here and there.

If you're just interested in Tolkien's Middle Earth you can skip the book. There are really only a handful of direct references to Middle Earth (and those are just references to names of characters and places) and while Norse mythology did inspire Middle Earth you'll have an easier read with a prose-retelling of it. However if you do enjoy (Norse) mythology in general and aren't turned of by poetry (and lots of very archaic language) this book might interest you.