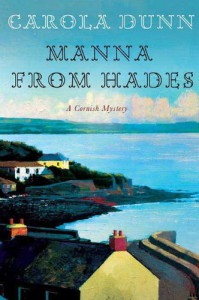 I'm going to stay with Dunn's Lady Daisy mysteries because this book didn't really overwhelm me. One major problem was that it tried to convince me that a character was unlikeable but never showed it. Megan keeps complaining about the fact that her boss is a misogynist who hates the idea of a women in the police force but we never see him treating her badly. Sure he is not the warm and cuddly welcoming type but at no point did he behave like he thought Megan couldn't do her job because she's a woman. He yelled at her once because she did not report to him when she was supposed to but when she explains that she found a witness who had vital information for the case and couldn't risk to keep her waiting because then she might disappear again he understands. At least once he tells her to do something because he is convinced she would be better at it than him and when he interacts with her male colleagues he doesn't treat them any different than her so I really can't see the sexism.

The only person he really looses his patience with is Megan's aunt and I can sympathize with him there. If I was a cop and a vital witness who found a body in her charity shop can't remember if she locked the shop or her flat (which is above the store), is incapable of telling me if there is anything missing and only remembers two days later that there was an anonymous donation of jewellery to the shop which could be connected to the murder I would probably yell a lot more than the poor inspector. (Disclaimer: It makes sense in context for Eleanor, Megan's aunt, to have a hard time remembering to lock her doors and as she assumed the jewellery was fake and turned up a day before the murder it also isn't completely unrealistic for her to forget about it in the first shock...but when she remembers she putts of telling the inspector about it for ridiculous reasons so I really can't blame him for getting mad at her. Also just because her tendency to forget door-locks exists makes sense doesn't mean it's not frustrating to read about...)

So, this book would already have been much better if it hadn't tried to tell me that a character was pure evil without showing me him doing anything evil but there is also the matter of the case itself. I don't want to keep comparing two different series by the same author but here I can't help it: Daisy is a proper amateur sleuth. She isn't working for the police but thanks to her Scotland Yard-husband and circumstances that are certainly not realistic in the actual world but make enough sense in the cozy-crime universe she gets involved in various cases and then investigates them. She does sort of work together with her husband and Dunn does avoid most of the more annoying cozy-tropes but she remains a civilian who is investigating a crime.

In Manna from Hades there's Megan, who as said is a police sergeant and it's her job to investigate the murder. There's also her aunt who is sort of the little old lady investigates-type except that she doesn't do any investigating. She never takes an active interest in the case in the way Daisy does. Her contribution to it consists of falling over the body at the beginning and then conveniently falling over the solution at the end (which the police managed to figure out almost simultaneously). I'm really not sure what was the point of that. It seems the book is trying to appeal to the cozy reader-audience but it isn't a cozy, it's a regular detective novel with real policemen (and women) investigating. Except for that it spends far too much time with a little old lady who does exactly zero sleuthing. I think I would actually have enjoyed this more when it hadn't tried to be a cozy because Megan and the rest of the characters in the book are quite interesting (hell, even Eleanor is, I just don't want to spent that much time with her when the narration tells us every other paragraph that she again forgot to lock her flat/the shop/her car) and the book also shows Dunn's talent when it comes to giving us characters that aren't simply black and white (which really makes me wonder even more why she is trying to convince us the Inspector is) and I wouldn't mind meeting them again but not so badly that I am willing to ignore all the stuff I didn't like.