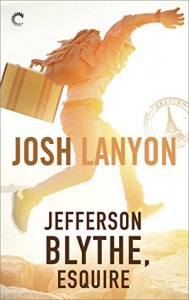 After his first relationship goes disastrously awry, Jeff Blythe uses his savings to tour Europe—the old-fashioned way. Armed with his grandfather's 1960 copy of Esquire's Europe in Style, Jeff sets off looking for adventure but finds much, much more than he bargained for...

In London, dodging questions from shady criminals about a mysterious package he most certainly does not have is simple. Losing the gunmen who are convinced he's someone else is not. And when George, an old friend, offers him help—and a place to stay, and perhaps something more—things become complicated.

Is George really who he seems? And is Jeff finally ready to act on his attraction?

From Paris to Rome and back again, Jeff and George fall for each other, hard, while quite literally running for their lives. But trusting George at his word may leave Jeff vulnerable—in more ways than one.

I love cozy crime novels. I am aware that it's not the genre with the most amount of realism. Most of the amateur sleuths would end up arrested or getting killed if they did the things cozy heroes/heroines did. But I don't really care because cozies are fun. Still my suspension of disbelief is only going to stretch so far. Amateur sleuth solving a case in which somebody killed his relative to inherit/business partner to not share the profits/anything else small scale? Yeah.
Amateur sleuth getting involved with the Russian mafia?

This just does not work. He would have been dead after five minutes...or considering Jefferson has a severe case of too stupid to live perhaps more five seconds.

Because considering he knows that there are people out there who want to kill him, he spends an awful amount of time wandering lonely streets (not paying attention to his surroundings because he is contemplating the nature of existence or something), opening doors without checking who is behind them and refusing to take the chance of putting an entire ocean between himself and the people who are after him.

Yeah. All this happens while he's doing a trip through Europe but even after he got kidnapped, watched somebody get shot, got nearly killed himself and had a close encounter with a mafia boss he doesn't want to go back to the States.

Oh and also George. He can't leave because George is in London. Which is another problem I have with this book.

I usually enjoyed Lanyon's crime-plots but even if I wasn't that overwhelmed, the characters made up for that.

Here. Not so much.

The chemistry between George and Jeff is non-existent.

Their backstory is that George once confessed his feelings for Jeff to him, but Jeff wasn't willing to admit to his feelings so he said some very hurtful things, George moved to a different continent and they didn't talk for four years. Now they meet again and we are told that they again/still have feelings for each other but I didn't see it. All I saw was Jeff constantly ignoring George's requests to drop a topic/leave him alone and George apparently not knowing Jeff at all and acting like he knows better than Jeff what he wants.

(I do get his 'You have only just accepted to yourself that you're gay, you should not immediately jump into a relationship'-argument but they also have a conversation that - paraphrased - goes like this: 'Now that you're out you should screw around a bit.' - 'I have no interest in screwing around. I had no interest in screwing around when I still tried to tell myself I was straight. This has not changed.' - 'Go screw around. I did it and

therefore you must want it as well for my experience is valid for everybody and I know everything better.')

All I got from them was two people who might still have feelings for a memory of somebody that they were projecting on the actual somebody, but that person had already changed so much in the meantime that they were very different from that memory.