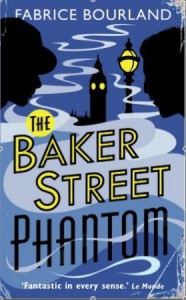 In the spring of 1932, with Londoners terrorised by a series of brutal murders, the private detective agency of Messrs. Singleton and Trelawney quietly opens its doors in Bloomsbury.

The first person to call on their services is a worried Lady Arthur Conan Doyle. She tells of mysterious events at 221 Baker Street – and a premonition that the London murders signal terrible danger for mankind.

Their investigation will take our intrepid heroes into a world of séances and spirits. Aided by the most famous detective of all time, they must draw on their knowledge of the imaginary to find the perpetrators of some very real and bloody crimes before they strike again…

It almost has to be admired how the author takes an awesome idea and tells it in almost the most boring way imaginable. Because of magic characters from famous Victorian novels appear on the streets of London. There is Sherlock Holmes - which is very cool - and there are Dorian Gray, Mr. Hyde, Dracula, and Jack the Ripper (it makes sense in context even though he is not a character from a novel) -which is less cool because they just continue what they did in the novels: kill people.

How do you mess such a great idea up? Easily: you take out any conflict and therefore, any excitement. The majority of the murders have already been committed by the time the novel starts and Singleton, our hero, just reads about them in the newspaper. (Conveniently all the murders are summed up in one article, despite there being huge differences in the MO). Since the paper also mentions where the murders have been committed he immediately makes the connection between that an 'all these places are mentioned in Dracula, Dorian Gray etc.'

Of course, that does not mean that he immediately goes 'clearly novel characters have been going round murdering people' but it doesn't take him long to get there. Shortly afterwards he attends a séance, despite not believing in the spiritual things and that one séance is enough to change his opinion on everything. Mediums are not all fake. A connection to the afterworld is possible. And not much later: the killer was probably Dracula.

And everything in the book is like this. There never is time for you to worry if the characters will get out of a dangerous situation/get somewhere in time because those are all resolved as quickly as the characters change their minds on long-held beliefs.

Talking about characters: they also couldn't save it. They remained so colourless that I could barely remember their names while reading the book.