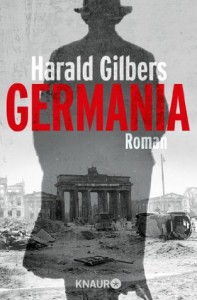 I was worried that this kind of set up gets just treated as a sort of gimmick. In the sense of 'by now everybody is tired of the twice-divorced cop with a horrible childhood, so we need new ideas for interesting characters'. Thankfully that's not the case. The author clearly did his research and you really feel the suffocating atmosphere and constant fear.

But...the author clearly did his research and really wants to show it. The infodumps are just...ugh.

I listened to less than an hour so far and got:

- many details about the finer workings of Gestapo, SS & co. Admittedly I did not know all of that and they are somewhat relevant to the plot but they were explained by simply inserting a page that could have come straight out of a textbook

- a reminder of the Nuremberg Race laws, which I still remembered quite well. Now not everybody does but they still got the same textbook-style explanation

- talking about the plot: there has been a brutal murder of a woman and that's all I know about that bit of the story so far

- I also know very little about the main character's private live. There have been a few scenes with his wife but not that many

Well at least my worst worries were unfounded...