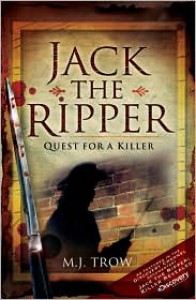 Long before writing this book Trow contributed an essay to The Mammoth Book of Jack the Ripper in which he brings up a suspect and then goes through all the details explaining why that person must be Jack the Ripper. At the end he says that he doesn't really believe that this man did it but he wanted to show how easy it is to frame somebody more than a century after the murders happened. Knowing that it's a bit odd reading this book because part of me expected it to end with a 'Trolololol didn't you listen the first time?'
Well, it doesn't. Trow is convinced that Robert Mann was Jack the Ripper. Mann worked in the Whitechapel mortuary, he was no famous person just one of the thousands who lived there, which is where the problem starts. No I don't believe that it was a royal conspiracy or anything in that vein (the parts where Trow explains how illogical all these theories are were my favourite parts of the book) but if the suspect was famous you get at least some of the things a modern reader expects as proof for somebody's guilt or innocence: you get records that tell you if he was in London at the time of the murders, you know things about his upbringing that might fit a serial-killers profile and so on. We don't know much about Mann's life before, during or after the murders, we know that he probably was in Whitechapel at the time because he hadn't the means (or reasons) to go somewhere else and, as he worked in the mortuary where they performed the autopsies on the Ripper-victims we have some records about what people said about him (and he was present at at least one inquest).
How convincing a case can you make when you lack so vital information? I'm not sure if I can say that I am convinced but Trow makes at least a logical case for Mann as the Ripper. There was no moment where I thought 'Wait? Now how did we arrive at this conclusion?'. Trow admits that there are things we simply don't know (and probably never will), which is much more than most Ripperologists do.
There were also some minor nitpicks I have with this book: the worst is that Trow actually believes in graphology. No further comment. The second is that when he talks about other Ripper-theories in the first chapters he is, well let's say somewhat economical with the truth. When he mentions James Maybrick he just writes that he was poisoned by his wife, no mention of the fact that today most people doubt that this was really the case. As that does not influence his reasons for dismissing Maybrick as suspect I can let that slide. Then he also talks about police-memoirs (of those involved in the case) and how they are mostly flawed because they were written so long after the events happened which is a good point but then he takes a second swing at Walter Dew who was one the first at the scene of Kelly's murder and who also caught Dr Crippen almost 20 years later. Trow just throws at us that today DNA-evidence has shown that the body in Crippen's basement couldn't have been his wife as another reason why we shouldn't trust his word but fails to mention that there is dispute over the fact how suitable the DNA-sample was for testing. Even if Trow thinks that the results are genuine it's bad style not to mention this (besides even if it wasn't his wife it still leaves Crippen with body-parts in his basement but that's another story).

Still, from the Ripper-books that focus on a single suspect this is one of the better ones.