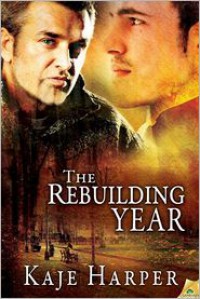 First it took me a bit to accept that two men who so far had identified as straight just happened to fall in love with each other but overall it was handled very well. There wasn't a switch that they turned on and suddenly everything changed. They needed quite a lot of time to accept what was happening to them and especially Ryan had a few 'no I can't be gay and now I'm going to get off with a girl somewhere to prove it'-moments.
Talking about girls: I wish there had been more likeable female characters. There are a few that get categorized as 'beautiful but shallow', Ryan's lab-partner is slow and annoying and John's ex-wife is also quite horrible to him (it does seem that she genuinly wants to do what she thinks is best for her children which just happens to be very different from what is actually best for her children but some of her behavious is simply hard to excuse). Ryan does have an ex-colleague he calls half-way through who is quite nice but she appears just this one time and is then never mentioned again.

I had not expected this books to be an actual mystery but from the blurb I'd still assumed that the crime would play a larger part in the story than it did. (The part about one of them being a suspect is also somewhat misleading. He does find one of the bodies and the exact circumstances make the police ask a few more questions than they normally would have but that's about it (view spoiler)).