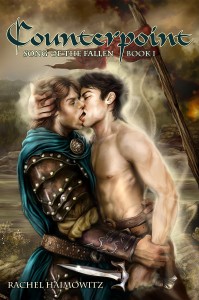 First of all: this book had actually good things. The author cleary tried to write not your typical 80s cliched fantasy-novel, there were glimpses of moral ambiguity: at one point Ayden sits at court with Freyrik and is shocked when a thief is condemned to death. Freyrik explains that the punishment for theft is not always death but this men had stolen rations that they kept for the case of a siege, meaning he had stolen from the most vulnerable. Ayden even admits that if he'd met this man (or any other) in battle he'd killed him without second thought but he is simply opposed to death-penality as elves don't practise it. The author does not try to convince the reader that one view-point is right and the other isn't but just leaves it like this and lets us decide what to make of this situation.

If only the rest of the novel had been like this...but alas...the characters were straight out of your less-than-average clichéd 80s fantasy-world. Ayden is your typical snobbish hippie-elf of the 'I am at one with nature and I will suffer if I cannot breath the fresh air'-type. He can hear people's 'songs' (and also nature's songs and God-knows-what-else) and so tell when they're dishonest. Oh and he glows in the fucking dark.

No seriously, he does.

Freyrick (I am actually too lazy to rant about the tendency of EVERY SINGLE FANTASY AUTHOR I HAVE EVER READ to randomly throw a few 'y' in the names to make them sound cooler) is your typical benevolent fantasy-ruler (well regent as his brother is the king but currently not in the country) who has the sun shining out of his arse. He's wise and kind and intelligent and

He also lacks any authority over Ayden who is supposed to be his bloody slave. Ayden insults him, refuses to do what he's told but Freyrick just sits there and does nothing. Now I'm not saying I would have wanted some torture 'we need to break him now matter how'-porn but I have not much trust in a ruler who can't even controll a single slave because he's pretty and he doesn't want to spoil his chances of fucking him one day.

Which brings me to the next point: everybody seems to assume that Freyrick would simply rape Ayden (including Ayden) but he doesn't.
Well...why?
Again, it's not something that I would have wanted to happen but if raping you slaves is seen as 'normal' and not a big deal in this society then why does he refuse to do it and gets really upset when he realized that this is what Ayden expects. Why is Freyrick so different from apparently all other men? Does he want a gold-star saying 'Look at me I'm not a rapist! isn't that awesome'?
Newsflash: 'not being a rapist' is not sufficent as characterization for one of the good guys.

The same goes for the attitude towards elves in general: his council, the soldiers and basically everybody else despises them and it felt like they treated Ayden like an animal not so much because he was a slave but because he was an elf. Then why does Freyrick treat him so much better from the beginning? Humans and elves have been at war for over 300 years, and there is absolutely no love lost between them. Why is Freyrick so willing to ignore all this? Ayden's deep hatred was much more realistic and understandable than Freyrick's cloud-cukoo-landish 'if I'm nice to him, he might like me...oh and then we can fuck'

Then there's the writing-style. Overall it's not bad but both in dialoge and the narrative the writer uses 'Tis, 'Twas, 'Twould instead of it is, it was etc. Not only occasionaly but every single time. It's highly annoying and riddiculous because there's no other archaic language.


Now there was something else...oh right. the treatment of women.

You see, if you take the real middle-ages as example for your fantasy-world and built it according to that you'll have the problem that the middle-ages were incredibly sexist. Now you can

Now the author might have tried for c) but failed terribly and it somehow came over more as a) which was cringe-worthy.
In the half of the book I read there were only two female characters with serious speaking-roles:
The first was Ella, the virgin. She's Ayden's sister and only because she's also captured Ayden is willing to accept his fate. She's weak and he has to protect her and so accepts Freyricks orders (more or less). Depending on what the plot needs she's either extremely naive and apparently doesn't even know what could have happened to her if she hadn't been captured by the only non-rapist in the whole world but anybody else or she is all wise and knowing and advices Freyrick on what to do with Ayden.

The other women is the whore. She's one of Freyrick's sister-in-laws, the first wife of his older brother. Yes, it's a poligamous world, and she gets referred to as First Wife (with capital letters, as if it was a real name) much more than by her real name (which I have already forgotten), not only by Freyrick (which kind of makes sense, if the society handles is that way) but also in the narrative itself which was bloody annoying.
First Wife is barren and therefore bitter...because what's a women who can't have children? That's her only point in life, right? She also flirts rather shamelessly with Freyrick and clearly has her eyes on Ayden, even though Freyrick tells her she should leave him alone...but of course it has to be him. Because plot. So she manages to catch him alone and tries to rape him. Plot-conveniently Freyrick comes just round the moment when Ayden tries to defend himself and now she accuses him of wanting to rape her. Because we totally need more story about evil women accusing poor, helpless, and innocent men of rape.
Conveniently Freyrick doesn't belive her for even a second because that might at least have made for some good character-development and made a change from Ayden's constant pouting and feeling insulted by Freyricks presence and Freyrick thinking about Ayden's hotness but that was apparently the less interesting possibility to come out of this. No, instead the only point of that was that Ayden becomes so traumatised that he rather accompanies Freyrick than stay in the castle with First Wife, something he had been opposed to before.
What better reason to include an attempted rape in a book?

Yeah, I read a bit on after that but the book had lost me at this point.