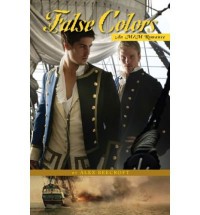 I really enjoyed this book. I am also quite sure that a lot of people will roll their eyes at the plot because the author really goes full force on the angst and drama-front. (Early in the story one of the main characters gets kidnapped and tortured. Then things get worse).

I was also very happy that the aftermath of such traumatising experiences wasn't ignored. Not everything can be solved with some hugs and kisses (yes, I am just looking at about 2/3 of all fanfiction-authors) and the book does not ignore this.

The characters were all quite interesting and even the side-characters had some depth and refreshingly not everything was painted black or white. There were no absolute villains and the heroes acted quite idiotic on occaisons.

Unlike other historical m/m-romances (*cough* Irish Winter *cough*) the author also acknowledged that being gay was not easy for large parts of our history and the issue is not simply dismissed with a shrug and some bullshit 'that doesn't concern us because reasons'-explanation. Instead we even get a main-character who is really conflicted because of his religious upbringing so not only does he have to deal with the fear of being found out and hanged but also with the fear of comitting a grave sin.

All in all the book had most of what I want in a historical romance, I just found the pacing in first chapters a bit odd. The narration jumped around a lot and more than once I had to check if I had perhaps missed a page because in one paragraph we were in one place and in the next already several month laters somewhere completely different.

Towards the end it also lost some steam and I wouldn't have minded if the final part had been 10 or perhaps even 20 pages shorter but that doesn't change the fact that I'd reccomend this book warmly to anybody interested in AoS-fiction and m/m-romance.