Review: The Eye of Osiris 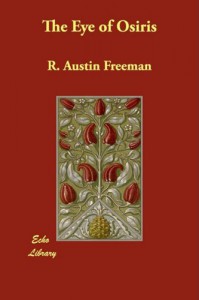 This book contains less science-talk than the first Thorndyke-novel. The Red Thumb Mark had so many pages dedicated to explanations of the scienctific background of the case that even I almost got slightly bored. The Eye of Osiris still has enough to deserve the description "it's like Sherlock Holmes but with real science" but not so much that people who don't geek out about forensics as much as I do are in danger of getting bored.

Though sadly, by not focussing on the forensic aspects as much it becomes rather obvious that the case is...just slightly above average. I managed to guess parts far in advance and felt there was to much padding till the characters arrived at the same conclusion. Especially the love-story was quite unneccessary and took up too much space. The author also somewhat overdid it with fun and quirky characters. Too many pop up as witnesses etc. and while they are quite funny I wouldn't have needed them all.

Nevertheless there were enough things I didn't guess to keep me entertained and Thorndyke remains quite likeable (and not as unapproachable as e.g. Holmes sometimes is)