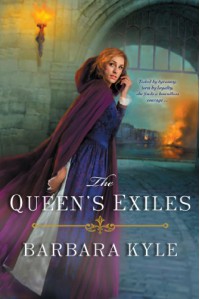 The blurb made it sound like a historical novel with some romance in the background but it is very much a straightforward historical romance that includes some of my pet-peeves in the genre: the 'there is no life without you' one and the 'nothing compares to you'-one.

Especially in the first half Adam and Fernella barely could stop thinking about each other, Even if they were separated they thought about the awesome hotness of the other every couple of pages. Don't worry...I did not forget that you were in love.

The other thing was that they really had to hammer it in, that the other one was special and nobody else ever gave them the same feeeeels. Even Fernella, who at the beginning talks about how much she loved her dead husband suddenly changes her tune to 'he was the best husband a woman could wish for but he never made her feel like Adam did'.

Yeah...I get it. Twu luv forever and ever.

However: unlike in many romances the designated couple's happiness is not the only thing at stake. The book is set in the Netherlands during the Spanish occupation and both Adam and Fernella have a price on their heads.

They are in danger. Constantly.

As are people close to them. Also pretty much constantly.

They are also pretty stupid. So they get in more danger. Constantly.

It was just too much. About halfway through I just didn't care anymore. In the course of two chapters somebody is getting tortured, another person gets his ear cut of and a child gets his throat slit?

If there is constant violence, gore and bloodshed in your novels your readers won't be constantly on the edge, biting their nails, they'll just get bored.

It's a shame because there is potential. The story is set in a place and time-period I didn't know much about (OK...I didn't know anything about) and - as far as I'm aware - isn't a setting that is terribly popular with writers of historical fiction. Sadly, as mentioned, that setting is mainly used for the blood and shock-value.

Fernella has also the potential to be a great character. Even though the book can't avoid some other tropes it does spare us the pure virgin heroine. Fernella wasn't only married before she met Adam she also earned money with prostitution before that marriage and it's treated as non-issue. She had no other choice and she feels no shame about it. (Though when she goes undercover in a brothel for plot-reason she desperately tries to avoid to have sex with anybody there which suggests to me that she did not think that plan through). But apart from that she stays somewhat colourless. As do all other characters. They're all either good or evil with little shades inbetween and you can smell the 'sacrificial lambs' that are going to die so that Fernella can angst about it from miles away.

ARC from NetGalley in exchange for a honest review