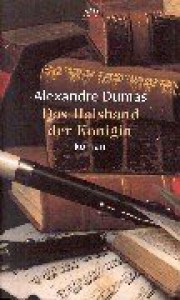 First it should be noted that this is the second book in a series (Memoirs of a Physician/The Marie Antoinette Romances) and it's certainly a good idea to read them in order. You don't have to as each contains a separate story but there is the occasional allusion to events from the past book that can be confusing.

Shortly before I read this one I read a non-fiction on the diamond necklace affair (How to Ruin a Queen: Marie Antoinette and the Diamond Necklace Affair. Highly recommendable by the way) and I am not sure if it was a good idea. It's definitely not necessary to know the true story to understand the book as it's not accurate at all. (Which I assume is down to a combination of Dumas not knowing all the facts and not caring about those he knew). So all it did for me was having me go 'But that's not how it happened' every few pages. It is interesting to compare fact and fiction but if I had the choice again I might do it the other way round.

The book itself has many of the things you expect from Dumas. There is lots of falling in love on first sight (basically everybody does so with the Queen...), many intertwined side-plots (soap-operas have nothing on him) and perhaps a few more coincidences than are believeable. However, especially compared to The Three Musketeers it's a lot darker. Understandably so as the diamond necklace affair is by many considered to be the first step to the revolution that cost Marie Antoinette and Louis their lives. This impending doom is an almost constant presence in the book. Even though Dumas' Marie Antoinette of course knows about this as little as the real one, she is aware that the affair will have wider consequences. Marie Antoinette has more depth and feels more like a real character than Anne ever did in The Three Musketeers or Ten Years After (to be fair she wasn't a main-character in either).
This book isn't a swasbuckling adventure and also nothing like The Count of Monte Cristo (except perhaps for the number of sideplots...why did we even need the fake Portugese thieves?) but it's still an entertaining read (that could have been a bit shorter).