Review: I Think I Can See Where You're Going Wrong 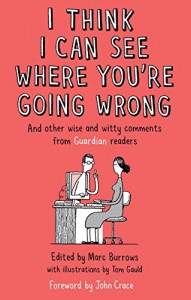 There are many books out there that collect amusing anecdotes about weird things happening in a certain environment. I can't think of a single job that involves dealing with people that hasn't yet been written about. This book doesn't really depart from that formula (after all even online-commentators are people) but it's still clear that more thought went into it than hastily throwing together a 'best of' from the Guardian comment section.

First of all each chapter has a hilarious introduction that pokes fun at the topic of the chapter, Guardian-readers and the Guardian itself in (more or less) equal amounts. There also are just as hilarious notes on some of the comments or people/events mentioned in them (like describing George Galloway as 'Reality TV cat-impersonator').

However what I really loved were the illustrations done by Tom Gauld (of You're just jealous of my jet-pack-fame...and that cool The Three Musketeers-cover). I love his style in general and they were just great interpretations of some of the comments. (I almost wish there had been a few more but it's quality over quantity I suppose).

If you only buy a single 'amusing anecdotes'-book make it this one.